The calculus is clear, and that is if you intend on making a name for yourself in politics, then the saying that there is no such thing as bad publicity does not quite fit the standards imposed by society.

One way or another, we would emphasize that politicians are also humans, so they make mistakes. Therefore, read the following lines and find out about the most controversial US political scandals in the last 60 years.

Back in the days when the scandal involving the President of the US at the time and young intern got introduced to the general public, reactions were majorly negative, since it was out of the question that the first man of the country confessing infidelity to his wife would be considered justifiable by any means.

Yet, it was exactly what happened during the presidency of Bill Clinton, and his scandalous adventure with Monica Lewinski found ways to fill the columns of all known and unknown papers of that time. Since it is believed this is just one of many Bill Clinton’s affairs at a time, he has been cemented as America’s unofficial bad boy number one, without competition.

This political scandal was so grand that the following controversies regarding United States presidents succeeded the suffix –gate, but none of the latter were up to the original wrongdoing.

Namely, the Watergate saga covers a series of illegal activities organized and carried into effect both by groups and individuals associated with former President Richard Nixon. The discovery of FBI agents led to his resignation, which enabled him to be pardoned by the succeeding president.

The chances that numerous controversial US political scandals would be easier to expose and available to the critical eye of the public if social networks, such as Twitter, were available like nowadays, are major. Fortunately, Scott J Cooper does his best to correct that mistake at present.

Even though some affairs remain hidden from the eyes of the public for good, this one majorly affected the course of history. Namely, if there was not for the Chappaquiddick incident, it is highly unlikely that Edward M. Kennedy would not manage to become a president of the US. Unfortunately, he caused a crash which led to his driving companion’s premature death.

The whole course of events might have been utterly different if he had informed the authorities in time. Yet, he waited until the next day, only to be found guilty for negligible driving.

Nowadays, one would not be surprised to listen about masters of war who support opposing sides at a war conflict, but back in the days, it was a novelty. Albeit it was illegal to sell weapons to Iran, officials from Regan’s administration did not mind making it happen, but the most controversial thing is that they used the financial gains they obtained to support Nicaraguan Contra forces.

Interestingly enough, the condemned ones were pardoned by Gorge Bush the elder, which arose additional questions among the public. Even though you might be intrigued by what you have just read, the list of controversial activities related to US politics is far from complete. Hopefully, things will change in days to come, since the aforementioned scandals did not bring true good to anyone. 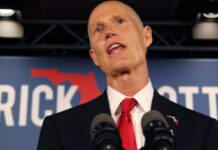 Why does Sen. Rick Scott Think that Trump’s Impeachment Trial is a Waste of Time?